SEAT this year decided to design a model that would be able to fully carry or be a worthy competitor to major rivals such as the recently revealed new Ford Fiesta, the Vauxhall Corsa and the Volkswagen Polo.

This new model was designed to bring security, design, performance and comfort to an even higher level.

In addition in the next few lines let us present you his key features like the outstanding dynamics, and impressive improvements in interior space and comfort. 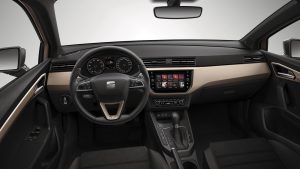 Speaking about his wider, in the head part will be opened more 24 mm and at the rear part will be opened 17 mm, and for that reason he will be more comfortable than the previous model. As we continue to analyze we come to the conclusion that the volume of the luggage space has been increased to 355 liters, and that we have to admit it is a really good change. It will be available exclusively with five doors and Reference, Style, FR and XCelence level of equipment.

It seems that in the interior part were made the biggest changes. Despite the wider and the better comfort, in the multimedia part were incorporated some fresh new systems with modern touch screen in the centre connected with the 8-inch info and entertainment system , including Android Auto, Apple Car Play and Mirror Link function, with several various buttons and controls for the most important functions in propose to improve their functionality.

Speaking about the security, this Ibiza 2017 model has wide range of available active systems such as adaptive control and assistance systems for helping you in traffic jams as well as more precise front and rear parking sensors.

For the part of the lights it is familiar that it will be available LED headlamps, as well as lights, fog lights, instrument panel.